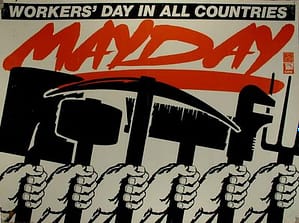 The Cumberland Museum is inviting friends and neighbours to join them for the Annual Workers Day Bean Supper at the Cumberland Recreation Institute on Saturday May 1st at 6:00 pm.

The Bean Supper commemorates the Big Strike of 1912 in Cumberland –  a bitter and prolonged strike which saw miners’ families turned out of the company houses in which they lived. The families set up tent communities that are remembered today in the names of places such as “Strikers Beach.” The government, seeing the destitution of the miners, sent boxcar-loads of dried beans to Cumberland.

This Bean Supper also corresponds with International Workers Day – a celebration of the achievements of the labour movement held in countries around the world. Workers’ Day celebrations were an annual fixture in Cumberland until the closing of the last of the mines in 1966. The festivities featured a parade and rally for better living and working conditions. This serious business was then followed by a boisterous field day of sports activities, picnics and treats for the kids and an evening dance. 1942 Cumberland earned the unique distinction of being the only city in Canada to celebrate May Day.

Cumberland was never shy about celebrating “Workers Day,” so why not come out to dinner and keep the spirit alive? Come and be part of this annual celebration that is part of the very fabric of the Village of Cumberland. The achievements of workers in their struggle for safer, healthier and kinder working condition are achievements we all benefit from – regardless of our employment today. It’s a wonderful achievement, and whether you’re part of a builders’ union or a Party Poker group, it’s great to come together and celebrate the achievements of those within your community

The 2010 dinner will be held at the CRI Hall in Cumberland and will also feature the Seattle Labour Chorus, a well know vocal group who sing traditional and contemporary labour songs around North America. The Seattle Labor Chorus was formed in March, 1997 to perform with Pete Seeger and other well-known folksingers at the Northwest Folklife Festival. Their stature has steadily grown and they are now the preeminent musical voice of labour in Seattle. Their wide repertoire reflects the concerns not only of the labour community but of all those struggling to promote a healthier, more equitable society. 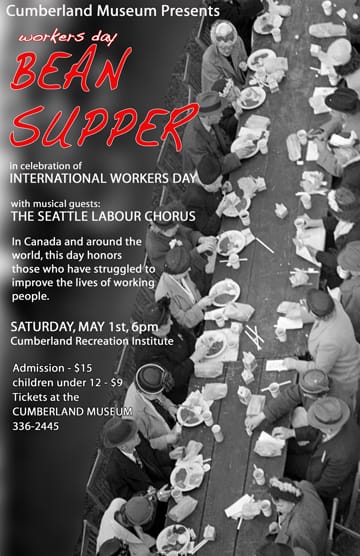